It has been my privilege to serve as your Village Administrator since my appointment by the Mayor and Village Council in July of 2008.My responsibilities to you as defined by the Ohio Revised Code include the following:

Under the direction of Mayor Stricklen, I am also responsible for Codes Enforcement; coordinating with the Loudonville Cemetery Board of Trustees to manage the Cemetery; assisting with the management of the Parks, Pool and Theatre; and a variety of other tasks and duties. In general, I oversee the daily operations of the Village. My primary focus is to see that you, as a citizen or visitor to the Village of Loudonville, receive the services and assistance you would expect from your local government employees. 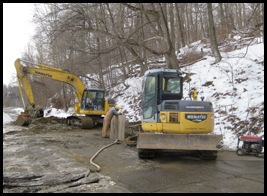 This Ohio Public Works Commission project upgrades our water and sanitary sewer systems with the replacement of a water main and service lines on South Jefferson Street, and included the relining and rehabilitation of sanitary sewer lines and manholes to reduce storm water infiltration. Contractors recently replaced five sanitary sewer manholes on Wally Road. Asphalt replacement will be finished as weather conditions allow, and the project is expected to be completed by May of 2011 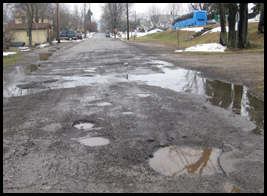 The replacement of the storm water system in the vicinity of Campbell and North Market Street is scheduled to begin in early Spring of 2011. The roadway on Campbell Street will be reconstructed with underdrains, water and sanitary sewer mains replaced, and ADA sidewalks and curb ramps installed from North Union to North Market. The total cost is estimated at $538,200, with 65% of the project funded by a grant through the Ohio Public Works Commission. The remaining cost will be paid primarily through the Village Storm Water Improvements fund. 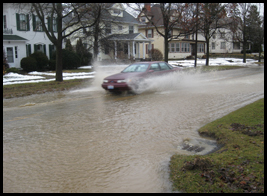 Also funded in part by a grant through the Ohio Public Works Commission, the East Main Street Storm Sewer Improvements project is presently in the design phase, and construction is expected to begin in May or June of this year. This project is designed to alleviate flooding issues on East Main Street, and reconstruct storm sewer lines in the Village right-of-way. The estimated total cost is $215,600, with 65% funding through the OPWC

In 2009 the Village was awarded $600,000 in grant funding through the Ohio Cultural Facilities Commission for the exterior renovation of the

Loudonville Opera House / Village Hall. The replacement of the roof and a great deal of exterior brick restoration was completed in 2010, and work continues to replace gutters and downspouts, storm water drainage lines, etc. Construction is expected to be completed by late Spring of 2011.

(LEFT): Loose bricks such as were found on the chimney have been restored and re-mortared where needed. (BELOW): Coon Restoration Specialists clean and apply a finish coat to the west side of the Opera House. 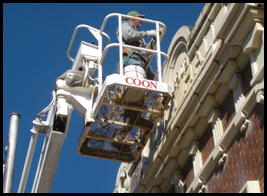 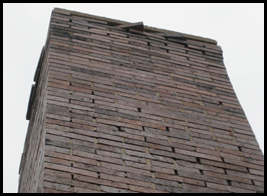 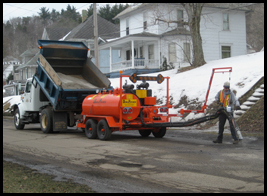 The Village was awarded a $40,000 grant by the Ohio Bureau
of Worker’s Compensation through the $safety Grants program toward the purchase of a Durapatcher. The Durapatcher is a trailer mounted concrete and asphalt repair unit that will see a great deal of use this Spring and Summer in the repair and continuing maintenance of our streets and alleys. 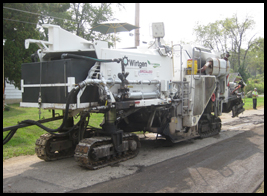 A 2009 Community Development Block Grant award of $38,000 allowed the Village of Loudonville to pave South Jefferson Street from East Main to Pendleton in 2010. ADA accessible sidewalk ramps were also constructed at the South Park Street intersection. The machine pictured recycled the existing asphalt, which was ground and processed before reapplication to the street.

The Pathway Bridge Project was completed in 2009, and received a great deal of support from a number of individuals and local organizations.
(LEFT) : Judy Webster, Council member Traci Cooper and Mayor Stewart Zody at the bridge dedication ceremony. 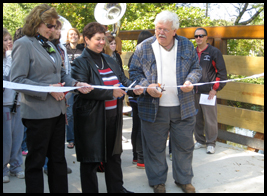 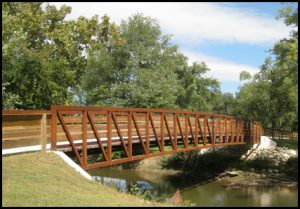 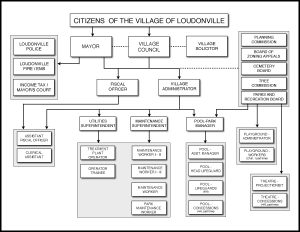